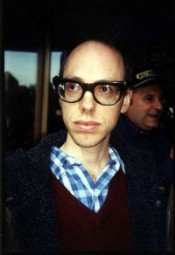 According to the folks at Cinematical, Paul Reubens (er, Pee-Wee Herman, I mean) will appear in the new Todd Solondz film Life During Wartime, a follow-up to his ultra-dark 1998 comedy Happiness. In some weird way, this seems to make a lot of sense to me–not because Reubens is a “controversial” or bizarre figure, but because I think he’s been handed a bit of a raw deal since his original obscenity arrest more than 15 years ago. And I think that Solondz has been similarly misread by a lot of people (even some people who like him).

I personally can’t wait to see this, even though I may have to go alone since pretty much nobody I know even liked his last film Palindromes (which I thought was great in a lot of ways).

I think a lot of people get Solondz all wrong. I know the popular conception is that he’s a sadistic misanthrope, out to humiliate his “freakish” characters–but I just don’t think that’s true. If anything, I think most people react negatively to his films because of guilt over their own cruel inner-dialog. In other words, when he includes a scene with disabled children performing Christian rap songs, it’s not intended as a joke; the joke is that we think it’s a joke. The truly dark, sad comedy is that deep down in the back corners of our brains, we think that these people can’t exist but as some kind of pitiable mistake or ironic punchline, despite the fact that they’re some of the sweetest characters in the film. And we hate Solondz for revealing our own cruelties and preconceptions in that way, so we project that hate right back at him.

The more obvious, intentional comedy is along those lines as well. What’s supposed to be funny (I think, at least) is the relationship between the “freaks” and the so-called normal world–it’s satire about social norms. To me, that seems so obvious. I mean, if you’ve ever read an interview with Solondz (or even seen a photo of him), you can’t escape the feeling that most of his work comes from decades of personal experience with cruelty and insecurity. His characters aren’t cheap stereotypes; they’re living, breathing reflections of his own difficulties in life, and I always feel like his approach is much more compassionate and curious and realistic than it is exploitive. That’s not to say that his films don’t contain any intentional irony or pessimism–because they most certainly do–but I don’t think it’s aimed in the direction most people assume.

But, of course, not everyone agrees with me. Which is the great thing about a guy like Solondz; he’s one of the few current filmmakers who’s work inspires passionate, relevant debate. You know… something more significant than “should Optimus Prime have lips?” (which he most certainly should NOT, by the way.)