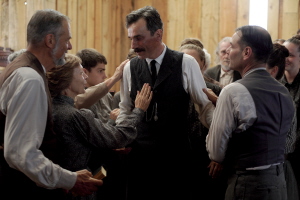 1) There Will Be Blood
PT Anderson’s epic tale of greed and violence in the American West is, without a doubt, the best film I’ve seen in a long time.

Its gorgeous panoramas, chilling score and utterly brilliant performances only add to the already fantastic screenplay (based in part, on Upton Sinclair’s novel Oil!). It’s arguable, though, what the film is actually about. Personally, I don’t think it’s about religion or extremism at all. Rather, it’s about how shockingly ordinary greed and violence and misanthropy are, and how, since the very beginning, these things have been at the very core of the American experience. And, in a lot of ways, the American dream.

Daniel Day Lewis is a lock for the Best Actor Oscar this year, and I wouldn’t be surprised to see Best Director, Best Cinematography and Best Original Music Score nominations as well.

I’ve seen There Will Be Blood twice now (once in September, once two weeks ago), and I think it actually gets better with distance. I’m working on a full-length review for Austinist this week, so check there on Thursday if you’re interested.

2) No Country for Old Men
This one will be near the top of most people’s lists this year–and for good reason. It’s a violent, darkly funny return to the Coens’ Blood Simple roots after a stretch of not-so-great flicks. Javier Bardem, Josh Brolin and Tommy Lee Jones are all fantastic in their respective roles, and despite the violence and the nihilism and the overall intensity of the thing, No Country still manages to be very funny and completely entertaining. And did anyone else notice that there’s virtually no music though the majority of the movie?

3) The Diving Bell and the Butterfly
Julian Schnabel’s third feature (and third biopic) is devastating, inspiring and gorgeous all at the same time. Chronicling the last days of Elle Magazine Editor Jean-Dominique Bauby, who was almost completely paralyzed after a massive stroke, Diving Bell is told from the patient’s perspective as he dictates a memoir using only his left eye. Some have said that Schnabel is more interested in empty, gimmicky visuals than in insightful probing, but I just don’t think that’s true. And even if it is, I’m not sure it matters. I watched until the very last breathtaking credit.

4) Control
Admittedly, I went into this movie wanting to love it. After all, it’s a biopic about a guy I admire (Joy Division frontman Ian Curtis) made by another guy I admire (photographer Anton Corbijn). But after seeing it a few times, I can tell you that my love for Control isn’t born of blind admiration–it’s just a great film. Far from the typical glossy Hollywood biopic, Control is closer to an honest character study than most movies dare to be. It makes no apologies for Curtis’ adultery or his eventual suicide–it only attempts to set out the events as they happened. Sam Riley is spectacular as Curtis, and the musical performances will give you goosebumps.

5) Helvetica
While I was waiting in line to see Helvetica at SXSW this year, a stranger asked me, “what is this movie about?” I answered, “well, it’s about a typeface called Helvetica”, to which she replied, “yeah… but what’s it about?”

It turns out that a movie about a typeface can be just as good as a movie about, well, anything else. Through interviews with Helvetica fans and detractors, the film explores our relationship with the ubiquitous font, and examines the ways in which it has influenced design and culture. It’s funny and insightful–and way too entertaining for a documentary about something so seemingly esoteric.

Also, filmmaker Gary Hustwit is the guy who founded the kick-ass DVD label Plexifilm. I’m kind of sad I didn’t make an effort to meet him while I had the chance.

Though I’ll admit that this movie isn’t for everyone, the Midnight Madness screening at the Toronto Film Fest was quite possibly the most fun I had watching a movie this year.

As far as I know, Sukiyaki has only been released in Japan at this point, but it could see a North American release next year thanks to a cameo by Quentin Tarantino.

7) Eastern Promises
Awesome. Eastern Promises is dark, violent and ambiguous in a way that only Cronenberg knows how to pull off. What’s great is that while he hasn’t made any artistic compromises, this is probably his easiest film to swallow since The Fly. And, of course, there’s a brilliant nude fight scene that, on its own, is worth the price of a ticket.

8) Bug
Directed by William Friedkin (The Exorcist), Bug is the story of a delusional war vet (played wonderfully by Michael Shannon) who convinces a lonely Oklahoma bartender that they’re both covered in tiny bugs–part of a secret government experiment gone haywire. And of course, things slide further and further out of control as reality clashes with paranoid fantasy.

Bug was originally written as a play, and it shows; the dialog is intricate, the whole thing takes place inside a hotel room and there are very few special effects. But a strong script and strong performances drive it toward a simultaneously hilarious and dramatic ending that even Ashley Judd couldn’t ruin.

Apparently, the distributors had no idea how to market this movie; they presented it as a horror film (which it’s definitely not) and it quickly came and went from theatres. Which is sad, because it’s really good.

9) Rescue Dawn
Rescue Dawn is a drama based on the life of German-born pilot Dieter Dengler who was shot down over Laos during the Vietnam war (a story Herzog had previously told in his 1997 documentary Little Dieter Needs to Fly). Christian Bale turns in an excellent performance as Dengler, and Steve Zahn (who I’ve never taken seriously) is surprisingly good as Duane, a captive American.

The film is broken into two halves: a semi-upbeat, Great Escape-esque first half, and a downbeat second half that feels more like the unvarnished last act of Grizzly Man. What I like about Herzog is that he can somehow conjure hope and hopelessness without either of them seeming wrong. It’s a long haul, but Rescue Dawn is worth it.

10) Grindhouse
Seeing Grindhouse on its opening night in Austin was easily one of my favorite filmgoing experiences this year. Having a local grindhouse series (Weird Wednesdays), and having hosted Tarantino’s personal film fests for years, I think Austin was in a unique position to appreciate the kind of films these guys were trying to recreate (not to mention the fact that a good number of audience members worked on or starred in the thing). Needless to say, the crowd was wild, and we hooted and hollered through the entire 3-hours. I did think it was a poor choice to run the slow-starting Death Proof AFTER the high-energy Planet Terror, but I still had a blast watching them both. And isn’t that what movies are all about?

ALSO LOVED
Frownland
It’s hard to explain Frownland–a short paragraph can’t do it justice. It’s the kind of thing you have to see and process on your own. It’s a slow, detailed character study about an impossibly annoying, neurotic door-to-door coupon salesman, and it gives absolutely no clues as to how you’re supposed to feel about him. Recommended. [Frownland website]

Offscreen
Nicolas Bro gives the performance of a lifetime as a man spiraling toward obsessive, murderous insanity. This is the only movie in recent memory I could forgive for being shot entirely handheld. An intense, slow-building thriller that’s definitely worth tracking down.

King of Kong
This documentary about two world class Donkey Kong players is one of the most entertaining docs I’ve seen in a long time. Reality is, most certainly, stranger than fiction.

Knocked Up
I know everybody is loving on Superbad, but I personally think Knocked Up was a much funnier, much smarter, much more durable movie. Not sure I buy into the recent accusations of Apatow’s supposed misogyny either–though I certainly wasn’t looking for those things when I saw Knocked Up way back in March.

No End In Sight
This is the best of the Iraq war docs sofar–a sober look at a tragic, frustrating situation.

Murder Party
Bloody, fun and inventive, Murder Party is the story of a man who’s kidnapped by a group of art school students intent on murdering him as a form of artistic expression. So much fun.

Smiley Face
It’s too bad that this movie never got a proper release, because it’s very funny–especially for a stoner comedy. It may even transcend the genre at some points. Anna Faris is hilarious as the inadvertent stoner, and it’s hard to believe that this is Director Greg Araki’s follow up to the wildly different (but also awesome) Mysterious Skin.

Killer of Sheep
Though Killer of Sheep is brilliant, I wasn’t entirely comfortable including it here, as it was finished in 1977. At any rate, it’s absolutely deserving of the praise it’s received.

Hot Fuzz
I’ll admit that I was a bit disappointed by Hot Fuzz on first viewing. Shaun of the Dead was a lot to live up to, and Hot Fuzz is a much subtler movie. But after some time and repeated viewings, I’ve come to like this cop movie parody quite a bit.

Dai-Nipponjin
Easily the one of strangest movies I saw this year (and that’s saying a lot), Dai-Nipponjin is a mockumentary about an underappreciated Japanese superhero who grows to Godzilla-like size when exposed to electricity. Bizarre and awesome.

Ratatouille
Ratatouille has its issues, but it’s a fun ride regardless. I love Patton Oswalt, and I love movies about food. What can I say?

Sweeney Todd
I just saw Sweeney Todd yesterday, and I haven’t completely processed it yet, but I definitely loved it. It may even be one of the best Burton movies yet.