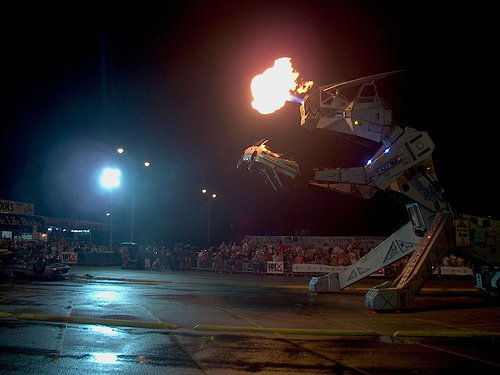 To cap off a week of absolute nuttiness, I went to see Transformers tonight for the second time. Only this time, the movie was followed by a car-eating, fire-breathing session of robot mayhem as Robosaurus took over the parking lot at the Alamo South Lamar. My throat is raw from screaming, “eat the car! eeeaaattt it!” over and over, but it was worth it.

As for the movie–it has its issues. It could lose at least thirty minutes of completely useless characters and cheap, pandering jokes. But let’s face it… this is a movie about alien robots, based on a cartoon that was, at its heart, an elaborate toy commercial–so you can’t be too hard on it without seeming like a jackass.

I’ll say this though– if you were ever into the Transformers as a kid, you’ll love every second that those corny, absurd, heroic robots are on the screen. The visual effects are some of the best in movie history, and the robot battle scenes are absolute dynamite. All in all, it’s probably the best we could have hoped for in a live-action Transfomers adaptation. Not brilliant, but good.