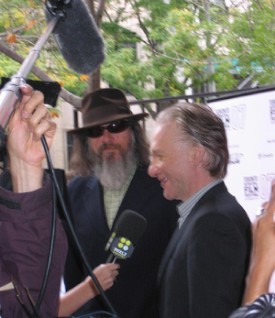 It’s been an insanely busy month. That’s my excuse for taking so long to post this recap of the Toronto International Film Festival. But suffice it to say, the fest was great, and I was happy to see so many friends during my visit to the T-Dot. We ate a lot of good food, saw a lot of good movies, and took a lot of public transportation. Yay Toronto!

Mother of Tears
The long-awaited third installment in Dario Argento’s “Three Mothers” trilogy, Mother of Tears wasn’t exactly what I expected, but I enjoyed it. Argento’s creepy, stylized fingerprints are all over it, and the photography is gorgeous. There is a lot more gore than I expected, but it’s all well-place and executed.

The film is dotted with inventive elements and fun performances (look for a kickass cameo by genre favorite Udo Kier), but ultimately they don’t tie together as well as in most Argento films. Part of the problem is the bad overdubbing and the occasionally cheesy dialogue–slips that seemed forgivable in late 70s/early 80s foreign horror, but now seem like avoidable annoyances.

Control
Anton Corbijn was on hand to introduce an early-morning screening of his feature film debut, Control. Easily one of my favorite films at the festival, Control is the heartbreaking biography of Joy Division frontman Ian Curtis–but it’s not your average Hollywood biopic.

Shot entirely in black and white, acted by virtual unknowns, and uncompromisingly honest, Control isn’t going to make anyone feel good about life. If anything, it’s a thoroughly depressing film. But Corbijn’s beautifully stark photography and Sam Riley’s utterly amazing performance make the film so affecting and unforgettable that I’ll be furious if this thing doesn’t get some Oscar nods.

Then there’s the music. The most revealing, insightful moments in the film revolve around the live performances–all played by the actors themselves in front of actual old-school Joy Division fans. The decision to keep these scenes live (rather than overdubbed) was a masterstroke, and I daresay that Corbijn has raised the bar on all musical biopics.

My Kid Could Paint That
One of the very few docs we saw, My Kid Could Paint That is the story of four-year-old Marla Olmstead, who became famous after her abstract paintings began to sell for tens of thousands of dollars. But what was originally intended to be a documentary about the prodigious Marla instead turned into an investigation of the girl’s legitimacy, and, ultimately, a comment on the documentary form itself.

My Kid Could Paint That is good. It’s honest, it’s maddening, and it’s occasionally very funny. It’s kind of a mixed emotional bag though, because on the one hand I felt strange about watching adults try to dismantle a little girl for the sake of petty jealousy and sensational journalism, but on the other hand the film raises some interesting questions about the nature of documentaries, and as we filed out, virtually everyone was involved in some kind of discussion about it.

Diary of the Dead
We were lucky enough to catch the midnight screening of George Romero’s new zombie flick, which Romero himself introduced (I’ve since learned that he lives in Toronto these days). Diary was a lot of fun. Not as great as I expected it to be, but certainly a decent zombie flick.

The film was shot entirely in first-person using handheld cameras, and that gimmick gets a bit annoying after a while. But there is a whole lot of zombie-killin’ fun, and Romero has thankfully steered away from making the zombies themselves central characters (as he did in the not-so-awesome Land of the Dead). Diary isn’t a classic on par with Dawn of the Dead, but it’s worth checking out if only for the inventive zombie killshots.

Religulous
Bill Maher and Larry Charles were on hand to preview clips form their long-rumored “documentary” Religulous. It’s basically a “new atheist’s” comedic perspective on religion; Maher travels the globe, interviewing all kinds of religious folks about their beliefs, then zings them at every opportunity.

Much like the recent spate of anti-religious books like “The God Delusion” and “God Is Not Great”, this one is going to be all kinds of controversial when it comes out. Maher sets himself up to be labeled “condescending” at every turn, and even when the questions he raises are legitimate, I can see a lot of people being turned off by his tone.

Having said that, the scenes we saw and the conversations we heard were completely hilarious, and I think this film has the potential to be much funnier than Charles’ recent mega-hit Borat.

No Country For Old Men
Without a doubt, this is the film I was most excited about seeing at TIFF. And man, does it deliver.

Let’s face it–The Ladykillers and Intolerable Cruelty both sucked, and we’ve all spent the last few years yearning for another funny, violent, perfect Coen Brothers film. Well, I’m happy to report that No Country For Old Men is it–a return to form in the vein of Blood Simple and Fargo.

Josh Brolin, Tommy Lee Jones and Javier Bardem all turn in utterly brilliant performances, and the film combines all the best elements of a successful Coen Brothers project. Believe the hype–this thing is fucking good.

Unfortunately, Encounters isn’t all that great. While some of the cinematography is beautiful, the film can never seem to decide whether it’s an exploration of the landscape or an exploration of its inhabitants. It switches modes so often that as a viewer, you’re constantly asking yourself what you’re supposed to care about.

Encounters has its moments, but for the most part it unfortunately plays like “Werner’s trip to Antartica, home video #1”.

Shake Hands left me kind of speechless–anything you could say about the film itself is sort of overshadowed by the terrifying knowledge that it’s a true story.

It’s a great film, but be prepared to be completely bummed after watching it.

Juno
Jason Reitman’s follow up to the much-loved Thank You for Smoking is a hilarious coming-of-age comedy that’s destined for cult greatness. Ellen Page is quirky and perfect as Juno, a teenage girl who finds herself pregnant and unprepared for parenthood. But Juno isn’t really about pregnancy at all, and it’s not even in the same ballpark as the usual bullshit, “oh my god, I didn’t realize pregnancy was so gross!” comedy.

Juno is one of the funniest, most original films of the year. And it’s especially impressive that it’s screenwriter Diablo Cody’s first film. Plus, Michael Cera is in it, so that’s pretty wicked too.

This thing is a raging ball of hilarious, action-packed fun. In a lot of ways, it’s the inverted evil twin of Kill Bill–rather than an American Samurai film, it’s a Western starring an exclusively Japanese cast (except for one character played by Tarantino himself), acted in English but subtitled anyway.

There’s so much to like about this film I don’t event know where to start. So let’s just say that if you’re a fan of westerns, samurai films, action films, comedies, or horror films, you need to see this one.