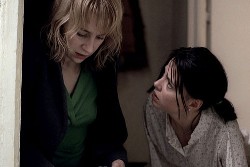 I’m going to be on a plane for a good chunk of the day tomorrow, so I won’t be able to post a proper link right away–but I wanted to write a quick note about two good movies opening in Austin tomorrow.

The first is the horror/comedy The Signal, which I heard a lot of buzz about at SXSW last year. I recently caught it at the Fangoria Weekend, and it’s pretty great. Not perfect, but certainly a welcome change for the genre. If you’re a horror fan, you’ll dig it.

The second is the Romanian drama 4 Months, 3 Weeks, 2 Days; an absolutely devastating look at the harsh realities of life in communist Bucharest. The film follows two women as one tries to help the other obtain an illegal, late-term abortion–but it’s not primarily about abortion, I don’t think. In any event, it’s a tough watch, but it’s very, very good.

UPDATE: Here are the reviews.