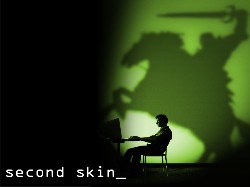 There are a lot of interesting movies premiering at SXSW this year, including Second Skin, a documentary look at the lives of seven MMORPG (Massively Multiplayer Online Role Playing Games) players. The trailer looks pretty great–though, admittedly, I’ve logged a lot of hours playing console games like Final Fantasy, so maybe it won’t be so interesting to someone who doesn’t care about video games.

In any event, I recently interviewed the film’s producer, Victor Piñeiro, for Austinist, and he’s a super cool guy. If all goes well, I’ll have a bunch more SXSW filmmaker interviews in the coming weeks.

UPDATE: The Second Skin guys arrived in Austin this week to do some promotion, and they’re posting video blogs of their SXSW experience on their youtube page.