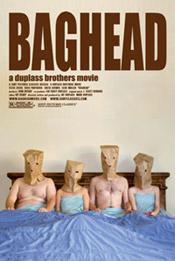 Back in March, I did an email interview with Mark and Jay Duplass, the super cool ex-Austinites behind the new comedy/thriller Baghead, which got tons of positive press from Sundance and Tribeca this year. The SXSW screening was so jam-packed, I didn’t even come close to getting in… and I got there an hour early.

Anyhoo, Baghead will open in Austin this Thursday (long before anywhere else in the country) with an outdoor screening at Star Hill Ranch. Im’ pretty psyched about it. Over at Austinist, we’re giving away a couple sets of tickets to folks who email us a “Baghead” photo of themselves. 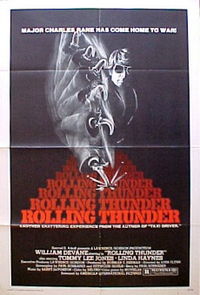 First, the biggest news in the watch online universe: Netflix has partnered with a third party company called Roku to develop a Netflix Watch Instantly appliance. Basically, you plug one end into the internet, and the other end into your TV, allowing you to play unlimited “Watch Instantly” titles through your boob tube (assuming you have a Netflix subscription).

This may not seem like huge news at first, but trust me, it’s an absolutely brilliant move on Netflix’s part (further expanding the functionality and value of their system), and it clearly signals the beginning of the end for standard VOD as it’s currently delivered by cable companies. Solid.

But what I really wanted to tell you about was this: the Paul Schrader-penned, John Flynn-Directed classic Rolling Thunder is now available to watch online. This is pretty big news, because it was previously difficult to find in any form at all. Also, because it’s fucking awesome.

The always brilliant Aphanisis Blog has a much better description of the film than I could ever muster, but I will tell you this: both William Devane and Tommy Lee Jones are at their absolute best, and I think I actually like Rolling Thunder more than Schrader’s more well-known scripts Taxi Driver and Raging Bull. And I completely love Taxi Driver, so that’s saying a lot.

The first and only time I saw Faces of Death was at a smoke-filled, beer-soaked party in ninth grade–so my terrified memories of it may be exaggerated. But despite the exotic thrill of watching something so utterly, obviously wrong, it definitely left a terrible, permanent, awesome impression on my brain.

So I’m both disappointed and relieved to find out that it was mostly fake.

Though I’m probably at least a year behind on this news (I usually am with these kinds of things), it just goes to show how hard it is to keep a secret these days, what with the internet and all. And though I can’t quite put my finger on it, there is something truly awesome about a world where a group of people can pull such an elaborate, brilliant, successful hoax for such an extended period of time.

The kicker? Faces has apparently pulled in $35M worldwide with word-of-mouth marketing alone. 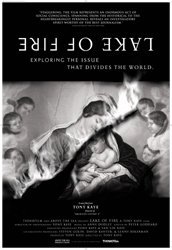 **Note: this is the second in a series where I explore Netflix’s “Watch Instantly” archive looking for great movies. Recently, Netflix added a “Watch Instantly” queue alongside the regular DVD queue. It’s pretty fantastic.

If the name Tony Kaye doesn’t ring a bell, don’t feel bad–his only notable film is the 1998 drama American History X , which he publicly denounced before its release, asking the DGA to credit him as “Humpty Dumpty” (I hope he’s kicking himself now, because AHX is a great movie).

It’s a shame, though, that Kaye’s not better known for his latest film Lake of Fire, an unflinching documentary look at America’s pro-life and pro-choice movements.

Shot in black and white (in itself, a strong metaphor considering the subject matter), Lake of Fire features interviews with liberal academics and conservative zealots in near equal measure, as well as intimate conversations with the doctors, nurses and women involved in the procedures.

At two-and-a-half hours, Lake of Fire is as probing as a documentary can be, exploring the moral uncertainties surrounding abortion, as well as the pro-life movement’s connections to fundamentalist zealotry and institutional misogyny. But the film’s real strength is its steadfast unwillingness to let the audience off the hook–even going so far as to include graphic footage of actual abortions being performed.

I’ve gotta tell you–I went in to this film thinking I had an unwavering opinion about the issue. But facing the uncomfortable reality of the procedure itself is soul-rending, and it seems to me that after watching Lake of Fire, any sane person will be deeply saddened and utterly conflicted.

* As of this writing, Lake of Fire is available for instant viewing on Netflix 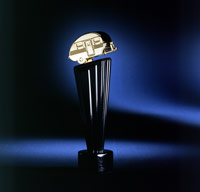 I had no idea the Golden Trailer Awards existed, but they look pretty fun.

Scrolling through the list of nominees is a good time–though you’ll have to do your own searching on Youtube to find any actual videos, which is sort of frustrating.

Personally, I’m rooting for the Dark Knight trailer, partly because it’s badass, and partly because I’m a total nerd. On the other hand, the trailer that got me most interested in a movie this year was this one for Julia Loktev’s abstract thriller Day Night Day Night. I mean–wow.

If you have cable, you can catch the GTAs on Fox’s “MyNetworkTV” (whatever the hell that is) this Thursday May 8th. The judges include Jim Sheridan, Harris Goldberg and Austin’s own mega movie nerd Harry Knowles. And it’s hosted by Sinbad, which, in itself, is hilarious.

Oh, and while we’re on the subject of trailers, watch this.

Though it’s been out for more than two months now (I’m a bit behind on my reading lately), there’s a great conversation between Werner Herzog and Errol Morris in the March/April issue of The Believer. And because The Believer is quite possibly the best magazine ever, you can read the full text online.

Near the beginning, Morris comments that Herzog’s films could be considered extended essays on “meaninglessness”–which is completely true, I think. But what’s great about Herzog is how he faces that meaninglessness: with wide-eyed wonder and genuine, unflappable excitement. He just seems like the most awesome human being ever, and I’m currently lining up some more Herzog interviews to read and watch (like this one, with a visibly intimidated Henry Rollins.)

It’s also well worth noting that Errol Morris’ Abu Ghraib doc Standard Operating Procedure is hitting theaters right about now. It’s not in Austin yet, but Morris was at a Houston Landmark Theatre tonight (I believe) for a special screening. Lucky.

UPDATE: Here’s a recent Slant Magazine interview with Morris. The interview is just okay, but in it Morris says something I really connected with:

“The criticism I would hear again and again and again would be that the attitude I had about the people in Vernon and Gates of Heaven was unconscionable. That puzzled me. I often thought, well, both movies are funny, and the fact that people find them funny embarrasses them. They don’t like laughing, they think it’s a guilty pleasure and hence would like to blame me for it. But I like [the] people in [my] movies. I absolutely love all those people, and have no desire to condescend to them.”

In the past, I’ve tried–albeit less elegantly–to say this about the average reaction to Todd Solondz’s films. And while Morris might not agree with my application of his idea, it’s just cool to hear someone say it so plainly. 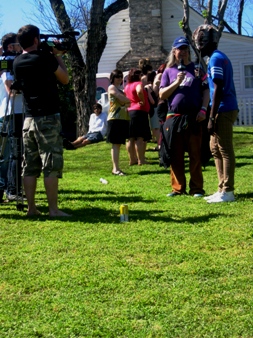 I haven’t actually seen Harmony Korine’s Mister Lonely yet–but I’m so intrigued by it that I wrote up a short preview post for Austinist. Korine is the guy who Directed Gummo and wrote KIDS (a movie I really, really like), and Mister Lonely looks completely strange and possibly brilliant.

And at first, it sounded vaguely reminiscent of Britney, Baby, One More Time, which I still haven’t seen, but just added to my Netflix queue (I had completely forgotten about it until Mister Lonely jolted my memory). 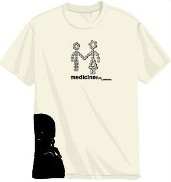 It’s been really hard to get caught up on SXSW coverage, but this week I’ll be posting a bunch more stuff. For now, check out my review of Barry Jenkins’ quiet, lovely, Medicine for Melancholy, which I saw over the weekend, and liked quite a lot. It’ll have its world premiere at the Alamo Ritz on Sunday March 9th as part of SXSW.

And besides the fact that it’s a good movie, Medicine has some absolutely gorgeous marketing materials, including these very cool t-shirts that aren’t quite right for me, but that I still love.

I recently interviewed SXSW Film Fest producer Matt Dentler about this year’s fest (which looks completely amazing, BTW). Matt’s a cool guy–you should also check out our conversation from last year, which contains a mini-bio at the beginning.